In the manufacturing world, the evolution of technology happens nearly daily. If someone told you that your favorite car had the chassis created using heated laser rays, you probably would have a hard time believing such a story. As unbelievable as it may seem, laser technology is being used to mold, shape, and work metal parts with an exceptional level of precision. We are about to share some of these secrets with you.

Let’s take a moment to learn some backstory for the sake of context. The word “laser” is actually an acronym that stands for “Light Amplification Stimulated by Emissions of Radiation.” Most people are familiar with the word by proxy. The term is used a lot in science fiction films. It can also be because they have heard about the science behind lasers and how it is used in medical procedures and to read data using optical devices such as DVD players, and CDs.

Lasers are also used by artisans to cut diamonds and thick metals for jewelry. The technology is also available in telecommunication systems, internet signals, scanners, printers, and many more applications. The basic science behind lasers is to increase the temperature of a steady ray of light until it’s hot enough to do what we need it to do. In the following lines, we are going to touch on the topic of laser cutting for sheet metal manufacturing. 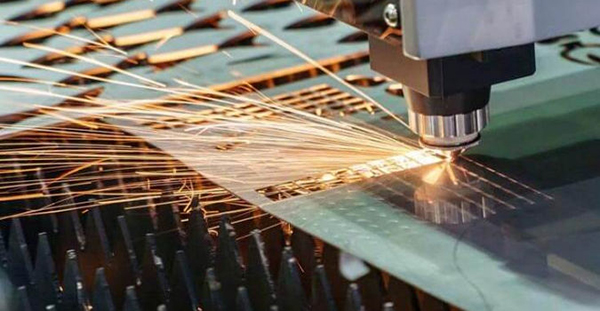 First of all – How is Laser Cutting Applied to Sheet Metal Manufacturing?

In sheet metal, manufacturing lasers play a prominent role in many industries. These hot beams of light can melt, cut, and vaporize all kinds of metals. They are also an excellent precision tool since the operator can manage the intensity of the laser and the depth of the cut. Laser cutting is an operation that thermal control to focus a light beam and manipulate it in a controlled environment. One of the most popular tasks handled with laser is press working used to engrave metal pieces.

So… What is the Science Behind Laser Cutting Technology?

Laser cutting applied to sheet metal manufacturing involves the use of CAD systems to manipulate a six-axis flat-bed system or a six-axis robot for 3D cutting. The process is completely automatic with minimal human intervention. Laser cutting can do amazing things on the shop floor. The precision rate of the tool is close to perfection, but the calculations required to make it work are pretty tricky.

The science behind laser cutting is not complex at all. In a laser cutter machine, a source projects a beam from a resonator through a beam path. The beam is projected as a column of high-intensity light with a single wave-length. The beam is bounced off in many directions using beam benders, which is nothing more than a series of mirrors arranged to make the laser visible and to handle the temperature of projection.

When the laser goes through the benders, it gets focused on the sheet metal that is being worked over. The concentrated beam goes through a nozzle before having contact with the metal sheet. The laser beam is delivered using compressed gas. Most of the time, manufacturers use plain oxygen, while others choose to work with nitrogen. The beam flow that goes through the nozzle helps the laser to melt and cut metals.

The laser beam can also be focused using a curved mirror placed at the cutting head. This is mostly used on specialized tasks or for small scale details. Some CNC laser cutters move the head of the cutter over the sheet metal to create specific shapes. These tasks can be either for engraving or to make a particular cut according to the specs. Distance is one of the most critical traits in laser sheet metal manufacturing. A miscalculation in this regard can deliver defective parts.

You will find a broad range of opinions online about the use of lasers to handle sheet metal manufacturing. A lot of engineers, technicians, and designers will agree that this manufacturing method is pretty convenient in all regards.  Very few naysayers are willing to say something negative, but those that do so say that the finished product often comes with a few details that need to be worked out by after-production polishment procedures.

The more critical voices say that laser cutting leaves a larger affected zone by heat near the edge of the cut. Lasers are, after all, a high-intensity source that melts metal real fast. Other than that, the most common complaint is the high price of even the most basic set of this type of hardware. When it comes to pros, everyone aggress that this manufacturing method is quick, accurate, precise, and it suits the most complex geometries like a glove.